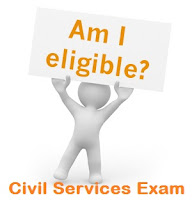 Provided that a candidate belonging to categories (b), (c), (d) and (e) shall be a person in whose favour a certificate of eligibility has been issued by the Government of India.
Provided further that candidates belonging to categories (b), (c) and (d) above will not be eligible for appointment to the Indian Foreign Service.
A candidate in whose case a certificate of eligibility is necessary, may be admitted to the examination but the offer of appointment may be given only after the necessary eligibility certificate has been issued to him/her by the Government of India.

NOTE I : Candidates belonging to the Scheduled Castes and the Scheduled Tribes and the Other Backward Classes who are also covered under any other clauses of para 3(ii)(b) above, viz. those coming under the category of Ex-servicemen, persons domiciled in the State of J & K, blind, deaf-mute and orthopaedically handicapped etc. will be eligible for grant of cumulative age-relaxation under both the categories.
NOTE II : The term ex-servicemen will apply to the persons who are defined as ex-servicemen in the Ex-servicemen (Reemployment in Civil Services and Posts) Rules, 1979, as amended from time to time.
NOTE III : The age concession under para 3(ii)(b)(v) and (vi) will not be admissible to Ex-Servicemen and Commissioned Officers including ECOs/SSCOs who are released on own request.
NOTE IV : Notwithstanding the provision of age-relaxation under para 3 (ii) (b) (vii) above, a physically disabled candidate will be considered to be eligible for appointment only if he/she (after such physical examination as the Government or appointing authority, as the case may be, may prescribe) is found to satisfy the requirements of physical and medical standards for the concerned Services/posts to be allocated to the physically disabled candidates by the Government.

SAVE AS PROVIDED ABOVE THE AGE LIMITS PRESCRIBED CAN IN NO CASE BE RELAXED.

These certificates are required to be submitted only at the time of applying for the Civil Services (Main) Examination.
No other document relating to age like horoscopes, affidavits, birth extracts from Municipal Corporation, service records and the like will be accepted.

The expression Matriculation/Secondary Examination Certificate in this part of the instruction includes the alternative certificates mentioned-above.

NOTE 1 : Candidates should note that only the Date of Birth as recorded in the Matriculation/Secondary Examination Certificate or an equivalent certificate as on the date of submission of applications will be accepted by the Commission and no subsequent request for its change will be considered or granted.

NOTE 2 : Candidates should also note that once a Date of Birth has been claimed by them and entered in the records of the Commission for the purpose of admission to an examination, no change will be allowed subsequently (or at any other examination of the Commission) on any grounds whatsoever.

NOTE 3 : The candidate should exercise due care while entering their date of birth in column 3 of the Application Form for the Preliminary Examination. If on verification at any subsequent stage, any variation is found in their date of birth from the one entered in their matriculation or equivalent Examination certificate, disciplinary action will be taken against them by the Commission under the Rules.

NOTE II : In exceptional cases the Union Public Service Commission may treat a candidate who has not any of the foregoing qualifications as a qualified candidate provided that he/she has passed examination conducted by the other Institutions, the standard of which in the opinion of the Commission justifies his/her admission to the examination.

NOTE IV : Candidates who have passed the final professional M.B.B.S. or any other Medical Examination but have not completed their internship by the time of submission of their applications for the Civil Services (Main) Examination, will be provisionally admitted to the Examination provided they submit along with their application a copy of certificate from the concerned authority of the University/ Institution that they had passed the requisite final professional medical examination. In such cases, the candidates will be required to produce at the time of their interview original Degree or a certificate from the concerned competent authority of the University/Institution that they had completed all requirements (including completion of internship) for the award of the Degree.

Restrictions on applying for the examination :

A candidate who is appointed to the Indian Administrative Service or the Indian Foreign Service on the results of an earlier examination and continues to be a member of that service will not be eligible to compete at this examination.